A UK-based Nigerian Twitter user has outlined the need for people to sort out their accommodation before traveling to the UK.

In a tweet he shared, @Oluomooderby revealed that some Nigerians are sleeping in university libraries and bus stops in the UK due to unsorted accommodation.

He also appealed to Nigerians to plan themselves before traveling.

He tweeted; Before you Japa to the UK, pls make sure you sort your accommodation out. It’s every man for himself over here.

Some Nigerians are sleeping in university libraries, bus stops, and even train stations. Plan yourself before you Japa to the UK. 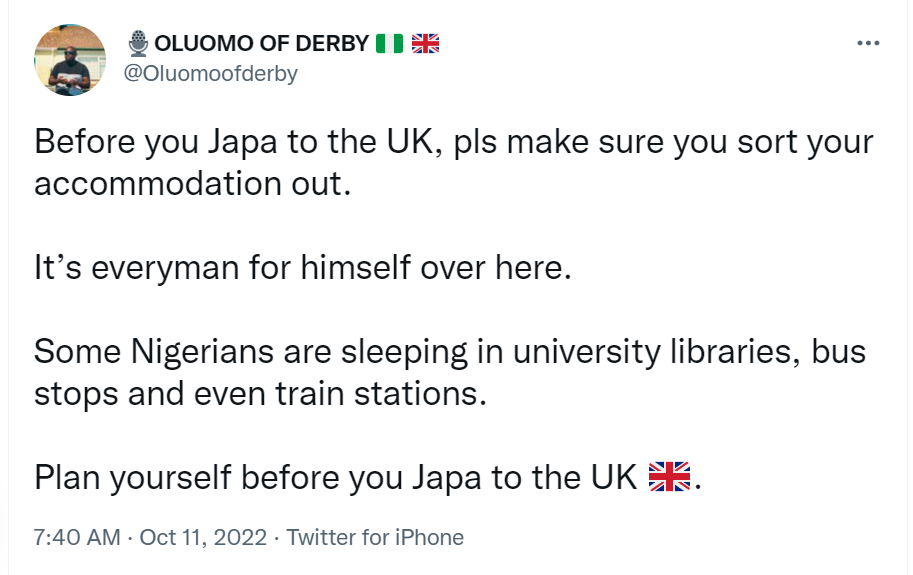 There have been a number of reports this month of UK universities having to house students in locations away from their campuses to cope with demand.

“The topmost concern we are observing amongst Indian students coming over to the UK to study is finding good accommodation.

Anecdotally I can tell you we are observing that compared to previous years, this issue has certainly increased”.

A while ago, a UK-based Nigerian man shared a photo of him backing his child while his wife is at work, something he said he never saw himself doing back home.

Since moving to the United Kingdom with his family, the Benin-born man said he has had to humble himself and take on the responsibility of nursing their baby while his wife is at work.

Taking to Twitter, he discussed how very different the roles of a father and mother were in his home country, Nigeria, and not necessarily so in the United Kingdom.

Sharing the photo of himself backing their daughter, the father noted that he never thought a day would come when he would be the one babysitting their child while his wife worked.

“If anyone had told me I will back a baby I will say is a lie… Well Bini man carry baby for back while madam went to work… UK will loyal you…”.