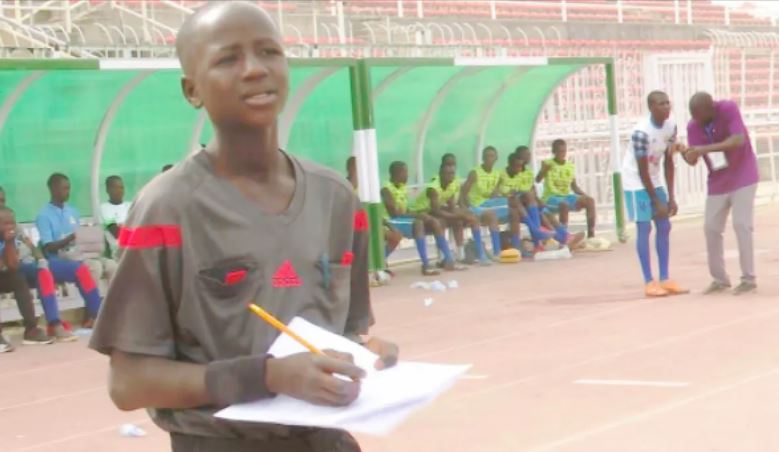 A 12-year-old Nigerian referee called Bello Musa is currently making a name for himself in the sporting sector in Kano.

Daily Trust Saturday had a chat with him recently.

The resident of Naibawa quarters in Kano, who is currently a Referee in Training (RIT), is the third child in his family and a JSS 2 student in a junior secondary school.

The kid referee, as he is popularly called in Kano, who shared his experience with Daily Trust Saturday, said his motivation came from his elder brother who is also pursuing a career in officiating football matches.

“My brother is a referee. I happened to be like his closest ally, who move around with him always. I accompany him virtually everywhere he is going especially when he is out to officiate matches. That’s how I took an interest.

“There was a time I accompanied him to a lecture (for officials) and they asked them questions and I answered most of them. I received compliments and prizes from the officials,” he said.

In the past three or four years of showing interest in the act, people have been commending the young lad as they see him as being more passionate about the career than even his brother. And that’s how he ventured fully into the system.

Speaking on being integrated into the system, he thanked God and his parents who have supported him 100 per cent to do it, adding that it didn’t come with any challenge as his brother was already into it.

“I didn’t face any challenge because my elder brother was already into it and he’s doing well. My father specifically encouraged me to go for it as it was not affecting our education in any way.”


He recalled that he started as an Assistant Referee before he started officiating as a linesman and was finally handed the whistle to officiate over a match.

Musa started holding a whistle at a football pitch in Darmanawa area assigned by his coach to test his capabilities in officiating.

“Honestly, I felt somehow at first until when my brother came close and offered some words of encouragement and told me that I can do it. All thanks to God and I did it successfully.”


Size or age are nothing of much concern to this referee in the making as he delivers justly on what he’s expected and punishes whoever is found wanting on the pitch.

Even on his first day as a referee, he remembered that he gave out a red card and there was not even a fuss from any quarters because they all saw that he was just and followed the rules of the game to the later.

“Even in my first officiating, I gave both yellow and red cards and I felt normal because they did what made me give them the cards.


“There was no time in the history of my officiating that a match ended with someone complaining of bad officiating, taking side or injustice. In fact, this is one of my motivating factors.


“Most of the matches I officiate usually end with thanks, handshake and kind words. No one has ever told me something that will make me feel bad.


“In some places, they are always asking of me to come whenever they have big matches, especially competitions, because they believe I will officiate justly,” he said.

Speaking about the relationship between him and his colleagues, he described it as a “smooth and very cordial one”

“The relationship with my colleagues regardless of my age is cordial. No one has ever made any discriminatory gesture or shown that he’s superior or older than me.


“What I enjoy the most from my colleagues is totally contrary to what people think. They really encourage and always want to see me do more.


“Sometimes, they are the ones pushing me forward even when I am not in the mood,” he added.

Musa loves watching football and enjoys both local and international matches and competitions.

“At the local level, I watch grassroots competitions while on the foreign scene, I watch Premier League, La Liga and the rest of them.”


He recalled that his best officiating session was a final competition at Gwagwarwa mini-stadium which has given him an edge and shot him into limelight in Kano local football.

“It was so successful that even the coach was constantly asking of me to come back and officiate for him. Many matches so to say.


“The one I will not forget was an officiating at Dawaki stadium that fight was anticipated either while the match was on or at the end, it was a semi-final. But it was successful.


“The other one is a final match at Mariri pitch where I even got an award and band afterwards. I was really celebrated.”

His brother still remains one of his role models in his career even though he looks up to a German referee because of the way he handles controversial decisions on the pitch.

“My first role model is my brother, Abdulmalik, he was my inspiration and always wanted to see myself officiating with total honesty like he is always doing. Also, there’s Bashir FIFA and Yusuf Indabawa (both Kano-based), these two always inspire me.”


Dreams for the big stage

Musa said his dream is to become a world-renowned referee and officiate at the highest men’s football competition, the FIFA World Cup.

“I want to see myself become a well-known referee officiating over national and international competitions like the World Cup.”

His dreams notwithstanding, Musa believes officiating will never affect his academic activities.

“It doesn’t have any negative effect on my academics. I make sure not to do anything that will disrupt my academic activities.


“It even gave me an edge in school because whenever any competition is organised, I officiate.


“Apart from school, this has developed my ability to mediate and separate fights/quarrels outside and within my family,” he said.

Musa hopes to further his studies up to the tertiary level and to study Physical and Health Education (PHE), which he believes will help hone his skills and capacity.